What's recently caught my eye in the world of video games. 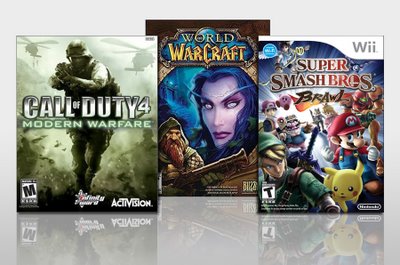 My involvement with video games is an on-again off-again affair. My last fling was with the MMORPG World of Warcraft (Massively Multiplayer Online Role-Playing Game. Now you know why it's an acronym).. it lasted until i had my very own level 59 Night Elf Druid. ... {sniffle} .. maybe I'll see him again one day... {quietly weeping}
That was over 2 years ago. Well i recently got hooked again.. for a bit..

I was bored and downloaded the demo for Call of Duty 4: Modern Warfare. It was really good. ... good enough to play the whole game. It's one of those rare-ish classics that you pick up and don't let go of until you see the credits roll. For any casual to hardcore gamer.. especially the ones into First Person Shooters I highly recommend this game.

Of course, now with two young kids the little video game time that i do have is usually playing with them (more specifically with 'him') so this little release on the wii has caught my eye: Super Smash Bros. Brawl. A long anticipated multi-player fighter starring many of the Nintendo franchise characters.

But there are a few games on the horizon that are more my particular taste that have piqued my interest. This official trailer of Street Fighter IV caught my eye, not only because it looks like a lot of fun to play (ohh,.. the arcade memories..) but also the style of the animation is very cool.

I guess when the game actually comes out this 'blog' phase might of worked itself out of my system and I can swap one unproductive hobby for another.