when we lived downtown i thought it was funny that if i had a few beer empties and i was too lazy to return them i'd leave them on the front porch and sure enough by morning they were gone. i'd get rid of stuff like that once in a while. ... magazines,.. cd cases,... stuff that i knew ppl would take.
you wouldn't think upper north york would be a prime 'garbage picker' location.. but it is.
don't get me wrong. i'm all for it. if you need it then by all means be my guest. i've been known to go through someone else's garbage myself on more then one occassion.
but it's sincerely surprising what ppl will take. one day i threw out some really cheap, really old carpeting. as per garbage pickup rules i cut it into 4ft wide strips and rolled them up into bundles. within hours,.. poof! vanished! i was amazed.
there's this old wardrobe... missing mirror,.. not that nice at all... not solid wood..not even particle board. i was wondering if the garbage guys would actually take it.. and was waiting for garbage day to put it out on the lawn... but then i had an idea. i'll put it out a few days early in hopes someone would take it. i even took the time to put all the drawers back in the right way. i decided to take out a few busted monitors too. those i actually have to take to a refuse depot as garbage collectors won't pick up computer stuff. i figure what could i lose.. i have to take them out to the car anyway.
a couple hours later.. poof! wardrobe was gone. monitors were still there. but i was amazed none the less. 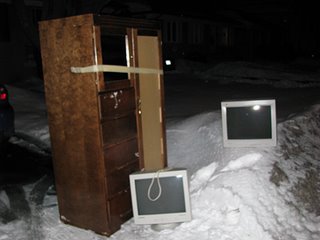 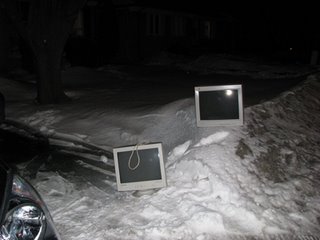 Labels: From the home of the neverending weekend...