A night at the opera.

we went to our first opera last night. it was ok.
it wasn't exactly what i expected.. i don't know why though...
whenever i think of opera i get this type of vision in my head: opera chick

there was a lot more 'acting' than i thought. i can clearly see now that the 'musical' is north american's take on traditional opera.

even though (surprisingly) i stayed awake the whole time there was a lot of head nodding, quick but small body spasms and even some snoring in the auditorium. i don't blame them though.. dark lights, soothing live orchestra and the average age of the audience was... well,... let's just say it was nice for the wife and i to be the 'kids' of the group again.

it was fun and i'm glad i went.. but i don't think i'm going to get my opera membership card anytime soon. ...and i don't feel bad about it. i don't feel like i fall short in any kind of cultural or good breeding index. i mean opera was popular waaayy back when .... there was no informational, culturally expanding intelligence box... or what is popularly (and mistakenly) referred to as a tv. 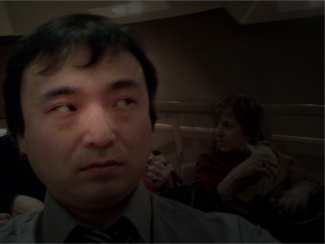